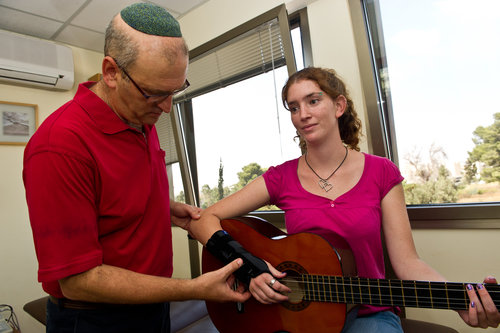 Performing arts medicine is practiced by only a small handful of Israeli experts. Although awareness is low and public funding unavailable, help can be found.

Some of them are not even in their teens, but dancers, musicians and others devoted to some field in the performing arts suffer from damage and pain that could be relieved and even prevented if they are seen in time by a physiotherapist who specializes in the field. An estimated 70 percent of adult professional musicians suffer from serious medical problems resulting from their occupation, and dancers – some of whom suffer from eating disorders, osteoporosis and irregular menstrual periods – are at risk from stress to their bones, joints and ligaments.

There is only a handful of experts here, and among the most prominent of names are Dr. Itzhak ZivNer, head of the orthopedic rehabilitation center at Tel Hashomer’s Sheba Medical Center, and Jerusalem physiotherapist Alan Wallis. In fact, the two have worked together and set up specialized clinics in Jerusalem and Tel Aviv.

and an even smaller niche in Israel. The Performing Arts Medicine Association (PAMA), set up in the US in 1989, was opened to foreigners, who constitute a fifth of its membership; Wallis is one of them. PAMA members are professionals in fields that include research, education and clinical practice. Many have written books and articles to inform and educate other professionals and performers.

Wallis received a physiotherapy degree from Tel Aviv University and then worked at Hadassah University Medical Centers in Jerusalem’s Ein Kerem and Mount Scopus. With his father a lawyer and his mother a nurse, he had no role models for entering his field, but his sister-in-law is a physiotherapist too.

In an interview with The Jerusalem Post in his private office at Beit Hatayelet in the Arnona quarter to discuss performing arts medicine, Wallis said his personal mentor was Jerusalem nonagenarian general practitioner (who still has a private practice) Dr. Cyril Sherer, to whom he owes a lot.

The physiotherapist initially did a lot of work in ergonomics

The scientific discipline examining interactions among humans and other elements of a system, especially work environments, to optimize human well-being and performance, and his clients were at the UN in Jerusalem, government offices and private employers.

Then, one day in 1994, one of the leading violinists of the 20th century, Isaac Stern, came to him complaining of back pain. This good friend of then-Jerusalem mayor Teddy Kollek was giving master classes for talented young violinists at the Jerusalem Music Center in Yemin Moshe.

“I treated his back pain successfully, and he invited me to see the young people playing. I noticed one who had lots of pain and other problems. I had treated dancers and musicians, especially those with spinal problems, before that. But he invited me to go on a three-week tour of performing arts physiotherapy to learn from the best in the field. I was sent to New York, Chicago and Washington.”

Wallis was fascinated by the specialty; although he continues to do general physiotherapy, he became an expert, and performing arts patients come to him from all over the country.

SINGERS, DANCERS, instrumentalists, conductors, actors and clowns have to be in very good shape, he said. The Alexander Technique – well known for relieving back problems, was actually developed at the end of the 19th century by an actor named Frederick M. Alexander as a personal tool to relieve his hoarseness and respiratory problems. He lost his voice, but he was able to speak and sing better due to his technique, which teaches people how to stop using excessive levels of muscular and mental tension during their everyday activities.

Years ago, Ziv-Ner and Wallis conducted a pilot study on the physical problems of talented musicians aged 14 to 18 at the Jerusalem Music Center and found that many of them were suffering. “We developed a program for preventing them and started from there. Many of the techniques came from the field of sports medicine.”

Wallis noted that the problem of performers’ physical problems received a boost in the 1980s from two famous American-Jewish pianists, Leon Fleischer and Gary Graffman, whose playing was affected by damage to their health from performing.

“There have been major musicians who changed their instruments or stopped playing completely because of their health,”

recalled Wallis, who plays a bit of piano himself. “I remember a brilliant girl flutist I treated who stopped playing already as a teenager. We just couldn’t help her. One has to understand performers. If they go to an orthopedist with their complaints, they’ll just say: ‘Stop playing!’But for them, that’s impossible.

“One has to give them a detailed questionnaire, find out what their problems are and modify their habits. That way, usually one can slowly bring them back to playing.”

Wallis regards musicians as “musical athletes. They start at a young age, are very competitive and need a lot of strength and agility. In addition, some of them have parents who wanted to be performers but didn’t have what it takes. They regard their children as their hope of what they couldn’t be. So they forbid them to to get involved in sports to keep fit so they don’t hurt their hands.”

Musicians are often secretive about their injuries, he continued, because the Russian aliya provided many people willing to work instead of them. “If you’re on sick leave due to pain from performing, the orchestras can easily bring someone else to replace you.”

BUT WHEN musicians do come to Wallis, they indeed suffer damage from their work.

Those who play instruments – and have to carry heavy ones around – have upperbody problems, while dancers naturally suffer in their lower body. Muscles, nerves, tendons and joints may be involved. The most important thing, said Wallis, is that they “have to learn to relax.”

Performers don’t take enough breaks in their practice. The British Medical Journal some years ago compared performers who smoke and those who don’t. “Surprisingly, the smokers had fewer injuries – because they took smoking breaks from their practicing! People who work all day on computers – including journalists – also don’t get enough breaks to stretch their fingers, hands and arms. I certainly don’t advocate smoking breaks, but they must relax to prevent stress injuries from constant repetitive movements.”

Pianists often suffer from problems with their necks, backs and tendons.

They have to adjust their seats properly to the height of the keyboard. Cellists have to lean over their instrument, so they have a lot of back pain. A US book by Richard Norris called The Musicians Survival Guide, which gives advice on ergometrics for performers, should be translated into Hebrew and be used as a textbook in music academies here, Wallis advised. Younger musicians say that harm won’t happen to them. Older ones are easier to reach.

But their are physiotherapeutic and other solutions to this problems of overuse of limbs. One can put tape on the side of the wrist to prevent them from going beyond a certain point and banging into another bone. Botox is sometimes injected by medical professionals for injuries. “I myself work with the music teachers, because the performer usually doesn’t trust medical professionals. They think we will just put them on medication, which can harm their performance, or tell them to stop. I film them playing and run the video back slowly.

They also may ask a friend to watch them play.”

Wallis recalled that Isaac Stern had a problem holding the bottom of his violin between his neck and his shoulder. “He didn’t have much of a neck. So he either built up the violin to make it higher or put padding on the shoulder of his jacket so his head wouldn’t be at a damaging angle.”

Performers who suffer from musicians’ focal dystonia – a neurological condition that affects a muscle or group of muscles causing involuntary muscular contractions and abnormal postures – see their fingers curl into the palm or extend outward without control. They may be given metal rings for their fingers to stabilize the joints. Biofeedback utilizing noise or lights can teach performers to relax their muscles, Wallis noted.

He often persuades injured pianists to perform “shadow playing,” in which they make the motions but don’t actually hit the keys. And instead of beginning recovery by playing fast-paced Rachmaninoff or jazz, which are very demanding, they can play gentle music first.

All instruments can lead to injuries;

they each have their own issues, said Wallis. Drummers perform the same repetitive movements. Contrabass instruments are so heavy that just taking them from one place to another can knock the back out. “Straps on backpacks for holding a violin case can be sewn on both sides to balance the weight.”

DANCERS often avoid eating and warming up in the morning. Classical dance is more problematic than modern dance. In the US, some professional dancers bring their flooring with them so its suits their bodies.

Standing up and demonstrating with his own feet, Wallis noted that Russian dance techniques are often very rigid.

They insist on a turnout – holding one heel opposite the other – at an unnatural a 180-degree angle. Instead, the dancer can practice standing with their feet at 90-degree angles, and their dancing will not suffer. Dr. Ziv-Ner persuaded many dance teachers to change to this better turnout angle, he said.

The pointe, in which ballet dancers stand on their toes, should not be practiced by pupils who don’t already have three or four years’ experience, he continued. Shoes needed to accomplish this are very expensive. If they were real ballerinas, they would have to replace the shoes five or six time a year. Many parents of young ballet pupils can’t afford it. Without shoes in good condition, dancers can get blisters, pain, stress fractures and micro-tears of ligaments.

“Pain is good for you, because it warns you of problems,”

said Wallis, “but performers have to recognize the signs. Rehabilitation is very important.”

The idea of moderation in all things, promoted by Maimonides, is the key to the health of all performers. “Don’t exaggerate, and use your bodies properly,” he concluded.

My name is Alan Wallis. I am married to Shoshi, an art therapist, and we have five children + grandchildren. I am a keen runner, scuba diver and skier.